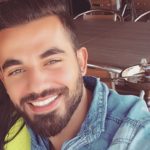 DNA cytosine methylation (5mC) is a very well established epigenetic mark in higher eukaryotes controlling gene expression and playing a key role in a wide range of biological processes such as genomic imprinting and X chromosme inactivation. Recently, DNA hydroxymethylation (5hmC) has gained a lot of attention in the epigenetics field and has been validated as a separate mark from 5mC having different functions and impact on gene expression. In the human protozoan malaria parasite Plasmodium falciparum, the presence of DNA 5mC has long been a subject of controversy in the litterature. During the course of this Ph.D we revisited this topic using state-of-the-art technologies including hydroxymetylated DNA immunoprecipitation coupled to sequencing (hmeDIP-seq) and oxidative bisulfite/bisulfite sequencing (oxBS/BS-seq) to investigate the presence of DNA cytosine methylation in this human pathogen. We showed for the first time that the most abundant DNA modification in P. falciparum is not 5mC but a novel type of cytosine modification we call here 5hmC-like modification. This modification is enriched in the gene body of actively transcribed genes. In P. falciparum, only one of the three canonical DNA methyltransferase type of genes have been detected. We used CRISPR-Cas9 genome editing to generate mutant parasites lacking the predicted cytosine DNA methyltransferase gene Pf.DNMT2.  We show that the enzyme is not essential for parasite proliferation and is not required for DNMT activity in parasite nuclear extracts. This points to the existence of noncanonical DNMTs gene(s) in this pathogen. Importantly, parasites lacking DNMT2 showed an 8-10 fold increase in their sexual commitment rate when compared to wild-type 3D7 parasites. Linking  Pf.DNMT2 to the control of malaria sexual commitment is an unprecedented finding. Although DNMT2 has been shown to methylate tRNA in other organism and in P. falciparum, it remains unclear how this function contributes to the activation of gametocyte development. Finally, we show that a new generation of human DNA methyltransferase inhibitors is highly efficient in killing multidrug resistant parasite and significantly reduces DNMT activity in P. falciparum nuclear extracts. Taken together, our data validate the existence of atypical DNA methylation pathways in P. falciparum that can be targeted for the development of novel antimalarial drugs.