Transplant rejection involves a coordinated attack of the innate and the adaptive immune systems of the host. To investigate this dynamic process and the contributions of both donor and host cells, we developed an ear skin graft model suitable for intravital imaging. We found that donor dermal dendritic cells (DCs) migrated rapidly from the graft and were replaced by host CD11b(+) mononuclear cells. The infiltrating host cells captured donor antigen, reached the draining lymph node and cross-primed graft-reactive CD8(+) T cells. Furthermore, we defined the mechanisms by which host T cells target graft cells. We found that primed T cells entered the graft from the surrounding tissue and localized selectively at the dermis-epidermis junction. Later, CD8(+) T cells disseminated throughout the graft and many became arrested. These results provide insights into the antigen presentation pathway and the stepwise progression of CD8(+) T cell activity, thereby offering a framework for evaluating how immunotherapy might abrogate the key steps in allograft rejection. 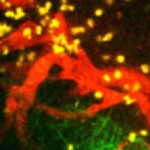 Transplant rejection involves a coordinated attack of donor cells by the innate and the adaptive immune system of the host. To gain insight into this dynamic process, we have developed an ear skin graft […]