Ultrastructural Changes of the Mitochondrion During the Life Cycle of Trypanosoma brucei. 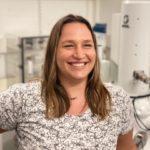 The mitochondrion is crucial for ATP generation by oxidative phosphorylation, among other processes. Cristae are invaginations of the mitochondrial inner membrane that house nearly all the macromolecular complexes that perform oxidative phosphorylation. The unicellular parasite Trypanosoma brucei undergoes during its life cycle extensive remodeling of its single mitochondrion, which reflects major changes in its energy metabolism. While the bloodstream form (BSF) generates ATP exclusively by substrate-level phosphorylation and has a morphologically highly reduced mitochondrion, the insect-dwelling procyclic form (PCF) performs oxidative phosphorylation and has an expanded and reticulated organelle. Here we have performed high-resolution 3D reconstruction of BSF and PCF mitochondria, with a particular focus on their cristae. By measuring the volumes and surface areas of these structures in complete or nearly complete cells, we have found that mitochondrial cristae are more prominent in BSF than previously thought and their biogenesis seems to be maintained during the cell cycle. Furthermore, PCF cristae exhibit a surprising range of volumes in situ, implying that each crista is acting as an independent bioenergetic unit. Cristae appear to be particularly enriched in the region of the organelle between the nucleus and kinetoplast, the mitochondrial genome, suggesting this part has distinctive properties.