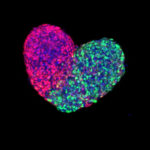 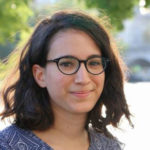 Mitotic spindles assemble from two centrosomes, which are major microtubule-organizing centers (MTOCs) that contain centrioles. Meiotic spindles in oocytes, however, lack centrioles. In mouse oocytes, spindle microtubules are nucleated from multiple acentriolar MTOCs that are sorted and clustered prior to completion of spindle assembly in an “inside-out” mechanism, ending with establishment of the poles. We used HSET (kinesin-14) as a tool to shift meiotic spindle assembly toward a mitotic “outside-in” mode and analyzed the consequences on the fidelity of the division. We show that HSET levels must be tightly gated in meiosis I and that even slight overexpression of HSET forces spindle morphogenesis to become more mitotic-like: rapid spindle bipolarization and pole assembly coupled with focused poles. The unusual length of meiosis I is not sufficient to correct these early spindle morphogenesis defects, resulting in severe chromosome alignment abnormalities. Thus, the unique “inside-out” mechanism of meiotic spindle assembly is essential to prevent chromosomal misalignment and production of aneuploidy gametes.