Proper understanding of the long-term epidemiology of chikungunya has been hampered by poor surveillance. Outbreak years are unpredictable and cases often misdiagnosed. Here we analyzed age-specific data from 2 serological studies (from 1973 and 2012) in Cebu, Philippines, to reconstruct both the annual probability of infection and population-level immunity over a 60-year period (1952-2012). We also explored whether seroconversions during 2012-2013 were spatially clustered. Our models identified 4 discrete outbreaks separated by an average delay of 17 years. On average, 23% (95% confidence interval [CI], 16%-37%) of the susceptible population was infected per outbreak, with >50% of the entire population remaining susceptible at any point. Participants who seroconverted during 2012-2013 were clustered at distances of 350 000 infections were missed by surveillance systems. Serological studies could supplement surveillance to provide important insights on pathogen circulation. 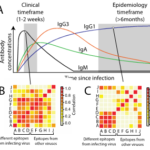 Optimizing the interpretation of serological data

When individuals get infected by a pathogens, they will develop antibodies against that pathogen that will continue to circulate in their blood. By using assays that can detect these antibodies, we can develop an […]