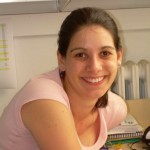 In Plasmodium falciparum, perinuclear subtelomeric chromatin conveys monoallelic expression of virulence genes. However, proteins that directly bind to chromosome ends are poorly described. Here we identify a novel DNA/RNA-binding protein family that bears homology to the archaeal protein Alba (Acetylation lowers binding affinity). We isolated three of the four PfAlba paralogs as part of a molecular complex that is associated with the P. falciparum-specific TARE6 (Telomere-Associated Repetitive Elements 6) subtelomeric region and showed in electromobility shift assays (EMSAs) that the PfAlbas bind to TARE6 repeats. In early blood stages, the PfAlba proteins were enriched at the nuclear periphery and partially co-localized with PfSir2, a TARE6-associated histone deacetylase linked to the process of antigenic variation. The nuclear location changed at the onset of parasite proliferation (trophozoite-schizont), where the PfAlba proteins were also detectable in the cytoplasm in a punctate pattern. Using single-stranded RNA (ssRNA) probes in EMSAs, we found that PfAlbas bind to ssRNA, albeit with different binding preferences. We demonstrate for the first time in eukaryotes that Alba-like proteins bind to both DNA and RNA and that their intracellular location is developmentally regulated. Discovery of the PfAlbas may provide a link between the previously described subtelomeric non-coding RNA and the regulation of antigenic variation.