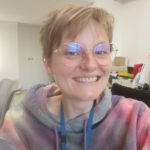 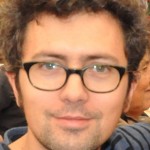 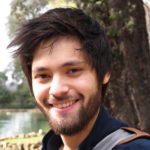 Epstein-Barr virus (EBV) targets B-cells where it establishes a latent infection. EBV can transform B-cells in vitro and is recognized as an oncogenic virus, especially in the setting of immune compromise. Indeed, immunodeficient patients may fail to control chronic EBV infection, leading to the development EBV-driven lymphoid malignancies. Ataxia telangiectasia (AT) is a primary immune deficiency caused by mutations in the ATM gene, involved in the repair of double-strand breaks. Patients with AT are at high risk of developing cancers, mostly B-cell lymphoid malignancies, most of which being EBV-related. Aside from immune deficiency secondary to AT, loss of ATM function could also hinder the control of the virus within B-cells, favoring lymphomagenesis in AT patients.We used RNA sequencing on lymphoblastoid cell lines derived from patients with AT and healthy donors to analyze and compare both cellular and viral gene expression. We found numerous deregulated signaling pathways involving transcription, translation, oncogenesis and immune regulation. Specifically, the translational defect was confirmed in vitro, suggesting that the pathogenesis of AT may also involve a ribosomal defect. Concomitant analysis of viral gene expression did not reveal significant differential gene expression, however, analysis of EBV interactome suggests that the viral latency genes EBNA-3A, EBNA-3C and LMP1 may be disrupted in LCL from AT patients.Our data support the notion that ATM deficiency deregulates cellular gene expression possibly disrupting interactions with EBV latent genes, promoting the oncogenic potential of the virus. These preliminary findings provide a new step towards the understanding of EBV regulation and of AT pathogenesis.