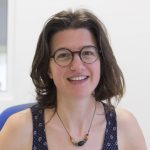 PeptidoGlycan Recognition Proteins (PGRPs) are key regulators of the insect innate antibacterial response. Even if they have been intensively studied, some of them have yet unknown functions. Here, we present a functional analysis of PGRP-LA, an as yet uncharacterized Drosophila PGRP. The PGRP-LA gene is located in cluster with PGRP-LC and PGRP-LF, which encode a receptor and a negative regulator of the Imd pathway, respectively. Structure predictions indicate that PGRP-LA would not bind to peptidoglycan, pointing to a regulatory role of this PGRP. PGRP-LA expression was enriched in barrier epithelia, but low in the fat body. Use of a newly generated PGRP-LA deficient mutant indicates that PGRP-LA is not required for the production of antimicrobial peptides by the fat body in response to a systemic infection. Focusing on the respiratory tract, where PGRP-LA is strongly expressed, we conducted a genome-wide microarray analysis of the tracheal immune response of wild-type, Relish, and PGRP-LA mutant larvae. Comparing our data to previous microarray studies, we report that a majority of genes regulated in the trachea upon infection differ from those induced in the gut or the fat body. Importantly, antimicrobial peptide gene expression was reduced in the tracheae of larvae and in the adult gut of PGRP-LA-deficient Drosophila upon oral bacterial infection. Together, our results suggest that PGRP-LA positively regulates the Imd pathway in barrier epithelia.