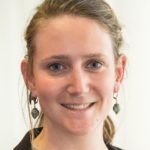 Candida auris is a recently described emerging pathogen in hospital settings. Five genetic clades have been delineated, with each clade being isolated from specific geographic regions. We here describe the first transmission between 2 patients (P0 and P1) of a clade I C. auris strain imported into our burn intensive care unit from the Middle East. The strains have been investigated with whole-genome sequencing, which validated the high similarity of the genomes between isolates from P0 and P1. We repeatedly screened the two patients and contact patients (i.e., other patients present in the same hospital ward at the time of the first positive sample from P0 or P1; n = 49; 268 tests) with fungal culture and a C. auris-specific quantitative PCR assay to assess transmission patterns. We observed that P1 developed C. auris colonization between 41 and 61 days after potential exposure to P0 contamination, despite three negative screening tests as recommended by our national authorities. This study illustrates that transmission of C. auris between patients can lead to long-term incubation times before the detection of colonization. The recommended screening strategy may not be optimal and should be improved in the light of our findings. IMPORTANCE While large outbreaks of C. auris in hospital settings have been described, few clear cases of direct transmission have been documented. We here investigated the transmission of C. auris clade I between two patients with a 41- to 61-day delay between exposure and the development of colonization. This may lead to changes in the recommendations concerning treatment of C. auris cases, as an incubation period of this length is one of the first to be reported.