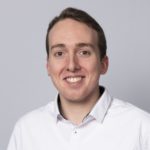 Inaccurate diagnosis of encephalitis is a major issue as immunosuppressive treatments can be deleterious in case of viral infection. The European bat lyssavirus type 1, a virus related to rabies virus, is endemic in European bats. No human case has yet been reported in Western Europe. A 59 year-old patient without specific past medical history died from encephalitis. A colony of bats lived in an outbuilding of his house. No diagnosis was made using standard procedures.We used a Next Generation Sequencing (NGS) based transcriptomic protocol to search for pathogens in autopsy samples (meninges and brain frontal lobe). Results were confirmed by PCR and by antibody testing in serum. Immunochemistry was used to characterize inflammatory cells and viral antigens in brain lesions. Cells and mice were inoculated with brain extracts for virus isolation.The patient’s brain lesions were severe and diffuse in white and gray matter. Perivascular inflammatory infiltrates were abundant and rich in plasma cells. NGS identified European bat lyssavirus type 1a in brain, which was confirmed by PCR. A high titer of neutralizing antibodies was found in serum. No viral antigen was detected and the virus could not be isolated by cell culture or by mouse inoculation.The patient died from European bat lyssavirus type 1a infection. NGS was key to identifying this unexpected viral etiology in an epidemiological context that did not suggest rabies. People exposed to bats should be strongly advised to be vaccinated with rabies vaccines, which are effective against EBLV-1.