e.g. searching for members in projects tagged cancer
Search for
Count
IN
OUT
Content 1
Content 2
Search
Go back
Scroll to top
Share
An action agenda for HIV and sex workers
Towards a cure for HIV–are we making progress?
© Clifton E. Barry III, Ph.D., NIAID, NIH.
Colorized scanning electron micrograph of Mycobacterium tuberculosis
Publication : Proceedings of the National Academy of Sciences of the United States of America 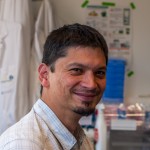 Although the bovine tuberculosis (TB) agent, Mycobacterium bovis, may infect humans and cause disease, long-term epidemiological data indicate that humans represent a spill-over host in which infection with M. bovis is not self-maintaining. Indeed, human-to-human transmission of M. bovis strains and other members of the animal lineage of the tubercle bacilli is very rare. Here, we report on three mutations affecting the two-component virulence regulation system PhoP/PhoR (PhoPR) in M. bovis and in the closely linked Mycobacterium africanum lineage 6 (L6) that likely account for this discrepancy. Genetic transfer of these mutations into the human TB agent, Mycobacterium tuberculosis, resulted in down-regulation of the PhoP regulon, with loss of biologically active lipids, reduced secretion of the 6-kDa early antigenic target (ESAT-6), and lower virulence. Remarkably, the deleterious effects of the phoPR mutations were partly compensated by a deletion, specific to the animal-adapted and M. africanum L6 lineages, that restores ESAT-6 secretion by a PhoPR-independent mechanism. Similarly, we also observed that insertion of an IS6110 element upstream of the phoPR locus may completely revert the phoPR-bovis-associated fitness loss, which is the case for an exceptional M. bovis human outbreak strain from Spain. Our findings ultimately explain the long-term epidemiological data, suggesting that M. bovis and related phoPR-mutated strains pose a lower risk for progression to overt human TB, with major impact on the evolutionary history of TB.