e.g. searching for members in projects tagged cancer
Search for
Count
IN
OUT
Content 1
Content 2
Search
Go back
Scroll to top
Share
A filamentous archaeal virus is enveloped inside the cell and released through pyramidal portals
Physics meets biology: The joining of two forces to further our understanding of cellular function.
© Research
Publication : PLoS pathogens

CRF19 is a recombinant form of HIV-1 subtypes D, A1 and G, which was first sampled in Cuba in 1999, but was already present there in 1980s. CRF19 was reported almost uniquely in Cuba, where it accounts for ∼25% of new HIV-positive patients and causes rapid progression to AIDS (∼3 years). We analyzed a large data set comprising ∼350 pol and env sequences sampled in Cuba over the last 15 years and ∼350 from Los Alamos database. This data set contained both CRF19 (∼315), and A1, D and G sequences. We performed and combined analyses for the three A1, G and D regions, using fast maximum likelihood approaches, including: (1) phylogeny reconstruction, (2) spatio-temporal analysis of the virus spread, and ancestral character reconstruction for (3) transmission mode and (4) drug resistance mutations (DRMs). We verified these results with a Bayesian approach. This allowed us to acquire new insights on the CRF19 origin and transmission patterns. We showed that CRF19 recombined between 1966 and 1977, most likely in Cuban community stationed in Congo region. We further investigated CRF19 spread on the Cuban province level, and discovered that the epidemic started in 1970s, most probably in Villa Clara, that it was at first carried by heterosexual transmissions, and then quickly spread in the 1980s within the “men having sex with men” (MSM) community, with multiple transmissions back to heterosexuals. The analysis of the transmission patterns of common DRMs found very few resistance transmission clusters. Our results show a very early introduction of CRF19 in Cuba, which could explain its local epidemiological success. Ignited by a major founder event, the epidemic then followed a similar pattern as other subtypes and CRFs in Cuba. The reason for the short time to AIDS remains to be understood and requires specific surveillance, in Cuba and elsewhere. 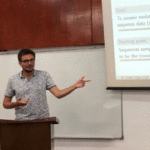 The dynamics of HIV-1 epidemics in Cuba (Campus France)

We received a grant by Campus France (PHC Carlos J Finlay, 2019-20210) to collaborate with the team of Dr Vivian Kourí Cardellá from Instituto de Medicina Tropical Pedro Kourí (Habana) on the dynamics of […] 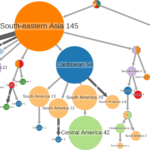