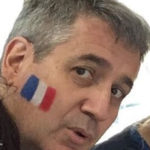 Encapsidation of genetic material into polyhedral particles is one of the most common structural solutions employed by viruses infecting hosts in all three domains of life. Here, we describe a new virus of hyperthermophilic archaea, Sulfolobus polyhedral virus 1 (SPV1), which condenses its circular double-stranded DNA genome in a manner not previously observed for other known virus. The genome complexed with virion proteins is wound up sinusoidally into a spherical coil which is surrounded by an envelope and further encased by an outer polyhedral capsid apparently composed of the 20 kDa virion protein. Lipids selectively acquired from the pool of host lipids are integral constituents of the virion. None of the major virion proteins of SPV1 show similarity to structural proteins of known viruses. However, minor structural proteins, which are predicted to mediate host recognition, are shared with other hyperthermophilic archaeal viruses infecting members of the order Sulfolobales. The SPV1 genome consists of 20,222 bp and encodes 45 open reading frames, only one fifth of which could be functionally annotated.IMPORTANCE Viruses infecting hyperthermophilic archaea display a remarkable morphological diversity, often presenting architectural solutions not explored employed by known viruses of bacteria and eukaryotes. Here we present the isolation and characterization of Sulfolobus polyhedral virus 1, which condenses its genome into a unique spherical coil. Due to the original genomic and architectural features of SPV1, the virus should be considered as a representative of a new viral family.