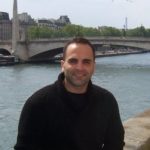 von Willebrand factor (VWF) is crucial to hemostasis, but also plays a role in inflammatory processes. Unfortunately, no proper monoclonal antibodies to study VWF function in mice are currently available. We therefore aimed to generate single-domain antibodies (sdAbs) recognizing murine VWF and blocking its function in vivo.Llama-derived sdAbs recognizing both human and murine VWF were isolated via phage display technology. One of them (designated KB-VWF-006) recognized the VWF A1 domain with picomolar affinity. This sdAb avidity was strongly enhanced via dimerization using a triple Ala linker (KB-VWF-006bi). When administered in vivo to wild-type mice, KB-VWF-006bi dose dependently induced bleeding in a tail clip model. In 2 distinct models of inflammation, KB-VWF-006bi efficiently interfered with leukocyte recruitment and vascular leakage.KB-VWF-006bi is an sdAb recognizing the A1 domain of human VWF and murine VWF that interferes with VWF-platelet interactions in vivo. By using this sdAb, we now also show that the A1 domain is pertinent to the participation of VWF in the inflammatory response.