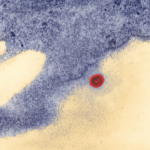 This project investigates the entomological genetic determinants of human DENV infectiousness to mosquitoes. Specifically, we are testing the hypothesis that mosquitoes are genetically variable in their dose-response to a DENV-infectious blood meal. We recently observed that the dose-response of wild-type Aedes aegypti mosquitoes to several low-passage DENV-2 isolates differed between two field vector populations from Thailand, resulting in a higher susceptibility of one population at low blood meal titers. The novelty of this project is to consider the mosquito vector genetic diversity as one of the potential factors underlying variations in the heterogeneity of DENV transmission patterns. Whereas other studies of human infectiousness to mosquitoes have been focusing on host and viral features, very little is known about the role of mosquito genetic background in DENV transmission. We expect to reveal that populations of mosquitoes might be differentially capable to acquire and transmit DENV as a function of viremia and other human host factors. Evaluating this variation will be essential to objectively compare different field sites or testing novel intervention strategies designed to reduce DENV transmission