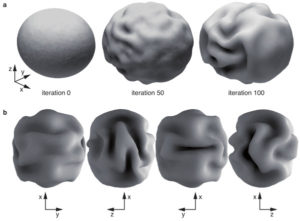 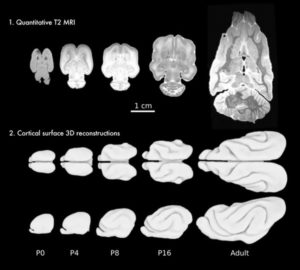 Neocortical folding is one of the most intriguing characteristics of the mammalian brain. Their pattern is very distinctive for different species, and there seems to be a remarkable relationship between convolutions and the architectonic and functional regionalization of the cerebral cortex. Yet the mechanisms behind the development of convolutions and their association with the cortical regionalization are poorly understood. We aim at building models of neocortical morphogenesis based on its geometry, mechanical properties and the growth. Our computer simulations suggest that folding is a natural consequence of cortical growth, and our models are able to reproduce several aspects of folding development, such as the relationship between cortical surface and brain volume among mammals, the period of compensation in the degree of convolution observed in gyrencephalic brains and the dependence of the degree of convolution on cortical thickness. We are interested in studying the effect of early cortical regionalisation on the development of folding, the development of primary, secondary and tertiary convolution, and the relationship between folding, structural and functional connectivity.
[bioRxiv]

Ferrets are exceptional animal models to study brain development, and can provide important information for the interpretation of human neuroimaging. They possess a subdivided subventricular zone, and a rich cytoarchitectonic arealisation, with ~60 cortical areas, similar to a cat. Ferrets are among the smallest mammals to develop the characteristic folds of complex brains. Unlike humans, whose brains start to fold during the 3rd trimester of gestation, and have at birth a complexity similar to that of adults, ferrets are born with a smooth brain and start to develop folds after 1 week. The brain of ferret kits is very immature, and the first weeks after birth provide us with a privileged window to study the development of the relationship between folding and neocortical cytoarchitecture, connectivity and function. We are currently looking at retracing the expansion of the ferret cerebral cortex from birth up to the 10th postnatal week using ultra-high field MRI and high-throughput 3D histology.