In vivo analysis of protein-protein interactions

A second main line of research of the team is focused on the characterization of protein-protein interactions by exploiting a bacterial two-hybrid screening technology (BACTH) that we have previously developed (Karimova et al., 1998). This system takes advantages of the modular structure of the CyaA catalytic domain (made of two complementary fragments) and involved the interaction-mediated reconstitution of a cAMP-signaling cascade in E. coli (figure 4). The BACTH system is particularly appropriate to analyze interactions between membrane proteins (Karimova et al., 2005, Karimova et al. 2009, Ouellette et al. 2014) and is now widely used to characterize protein-protein interactions in the prokaryotic world. 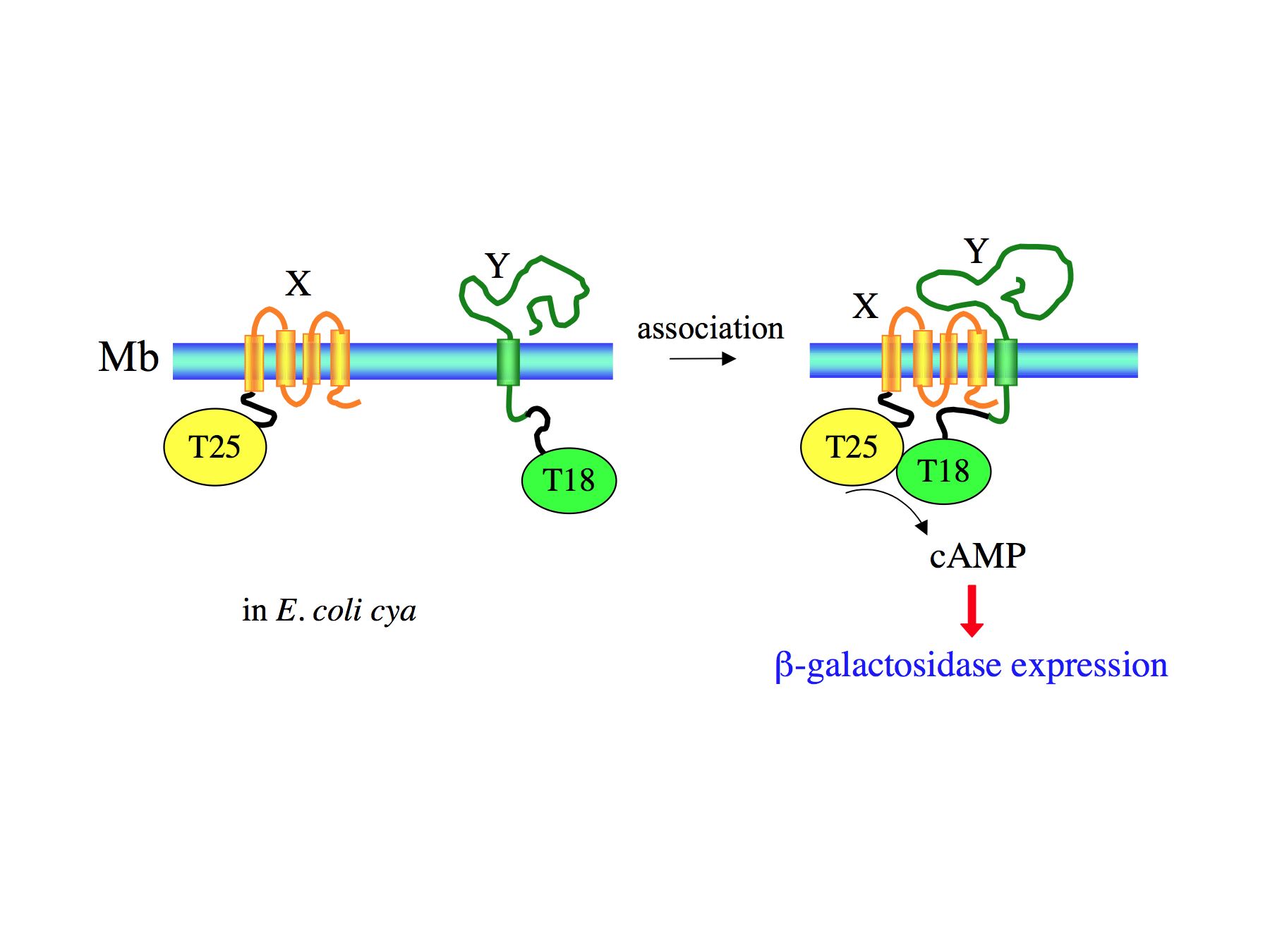 In this genetic assay, polypeptides of interest (i.e. X and Y) are genetically fused to two complementary fragments (T25 and T18) of CyaA catalytic domain, and the hybrid proteins are co-expressed in an E. coli cya strain. Association of the two chimeric polypeptides allows functional complementation between the two CyaA subdomains and restores enzymatic activity: the synthesized cAMP, can then activate gene transcription (via binding to the Catabolite Activator Protein, CAP) of catabolite operons (such as lac operon that leads to  b-galactosidase expression).

In the recent years we have exploited this genetic assay to study the assembly of the E. coli cell division machinery (divisome) which is a multimolecular complex made of more than 15 essential proteins (called Fts), among which many intrinsic membrane proteins. This complex assembles into a ring-like structure at the future division site to catalyze the cell septation. BACTH interaction assays are used in combination with genetic studies and cytological techniques (in situ localization of GFP fusions) to explore the molecular determinants of association between the different Fts proteins (Karimova et al., 2005). Several small integral membrane polypeptides have been identified by BACTH screening and shown to be novel components of the divisome (figure 5). We propose that these small membrane proteins may be able to stabilize the cell division apparatus in stress conditions (Karimova et al. 2009, 2012). More recently we similarly explore the cell division apparatus of Chlamydia, an obligate, intracellular bacterial pathogen of humans and animals. Chlamydia cell division is remarkable as this bacterium is lacking the essential and highly conserved FtsZ protein as well as peptidoglycan. Our studies suggest that, in Chlamydia, another conserved protein MreB may act as a central co-ordinator at the division site to substitute for the lack of FtsZ (Ouellette et al. 2012).