e.g. searching for members in projects tagged cancer
Search for
Count
IN
OUT
Content 1
Content 2
Search
Go back
Scroll to top
Share
THE KEY ROLE OF CXCL12/SDF1 CHEMOKINE IN THE ANGIOGENESIS/MYOGENESIS COUPLING DURING MUSCLE REGENERATION
Microglial role in the septic associated encephalopathy
© Research
Project

Sepsis associated encephalopathy (SAE), a major complication of sepsis is characterized by impairment of consciousness which ranges from delirium to coma and is associated to electroencephalogram (EEG) pattern alterations, increased mortality as well as long-term cognitive impairment or psychological disorders including depression, anxiety and post-traumatic stress disorders. The pathophysiology of SAE remains unclear; three major processes seem to be involved including diffuse neuroinflammation, alterations of the blood-brain barrier (BBB) and excitotoxicity. Pathological examination of the brain of patients having died of sepsis consistently show evidence of increased apoptosis in specific structures (i.e. amygdala, nucleus tractus solitarii, locus coeruleus) activated in response to stress during sepsis  inducing structural changes and dysfunction 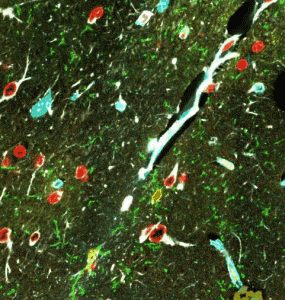 In this project, our aim is the study of astroglial response in specific structures such as the hippocampus, the amygdala or the other neurovegetative centers with behavioral study, computational neuroscience, electrocorticographic recordings, imaging and automated image analysis on specific structures to study specific phenotypic alterations related to post sepsis cognitive improvement. Finally, we will validate the hypothesis on human brain samples to support the evaluation of neuroprotective drugs in preclinical studies.