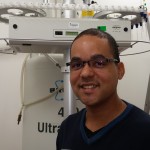 Removing “chemical blind spots”, the case of the hydroxpyrazoles

The synthesis of 5-hydroxypyrazoles has been trivial for about 140 years. Indeed, the synthetic path found by Knorr in 1883 was extensively used over the years to prepare many pyrazol-5(2H)ones featuring a variety of substituents on their nitrogen 1. On the other hand, as depicted below, the isomeric pyrazol-3(2H)ones are less easily obtained and, out of all the N-substituted hydroxypyrazoles reported (more than 25000), about 7% are featuring this structure. This difference, which is only due to the availability of simple synthetic accesses, is what could be called a “chemical blind spot” since the corresponding chemical entities are less present in the chemical space and are thus less evaluated in screenings. The objective of this project, which was sponsored by the Medicen Initiative and generously funded by the Région Ile de France (Chemical Library Project, grants I 06-222/R and I 09-1739/R) was to design original synthetic accesses and to generate chemical libraries of new chemical entities. These compounds would then be added to the Chimiothèque Nationale collection for any biological evaluations and would also be evaluated in-house on the many assays running on the screening platform facilities at the Institut Pasteur. 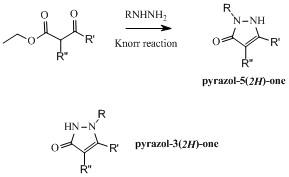 Concerning the pyrazole chemistry we reported, it started years ago with the usual combination of luck and observation. Indeed, as we fully explored, it turns out that it is very easy to prepare in one step many alkoxypyrazoles of type B from the corresponding alkoxyacetoacetates A and hydrazine hydrochloride (1). With this, we started to investigate the regioselectivity of their N-arylation (2) as well as the introduction of aryl side chains on carbon 4 of the pyrazole nucleus (3). For instance, from compound 1 we could prepare many libraries of compounds such as 2-4. Finally, the cleavage of the alkoxy function provided an access to original libraries of pyrazol-3(2H)ones such as compounds 5. 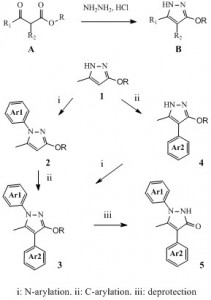 This work then kind of snowballed as we were led to prepare many pyrazole-bearing building blocks (4,5) such as the one depicted (many are still available for sale) and, from them, we prepared even more series of new chemical entities with a pyrazole ring system (6-8). 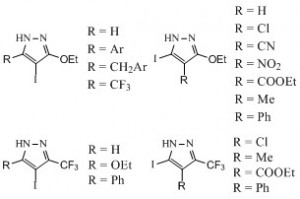 Meanwhile, plenty of biological as well as biochemical screenings were made with these compounds and sometime the results of these screenings led us to try to overcome even further some of the limits of our synthetic accesses to prepare more specific pyrazol-3(2H)ones isomers. For instance, we studied the use of 1,1-dimethoxyethene 6, to regio-selectively prepare many 1,5-disusbtituted derivatives such as compound 13 since these could not be selectively prepared by direct N-arylation of 1-methoxy-5-arylpyrazoles (9). 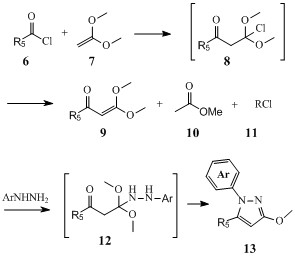 Finally, the results of another screening, focusing on the search for antiviral compounds, was a very nice conclusion to this endeavor. If you are interested, much of the medicinal chemistry which followed the hits resulting from this antiviral screening is described in the “Alkoxypyrazoles, inhibitors of DHODH” project of this website.