“Transposable elements, polydactyl proteins and the species-specificity of human biology” 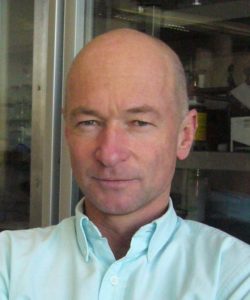 Abstract : Transposable elements (TEs) account for more two-thirds of the human genome, and as genomic threats they are subjected to epigenetic control imposed from the earliest stages of embryonic development. We previously contributed to determine that an important component of this process is the sequence-specific recognition of TEs by KRAB-containing zinc finger proteins (KRAB-ZFPs), a large family of transcription factors that act by recruiting inducers of heterochromatin formation and DNA methylation via their cofactor TRIM28. We further demonstrated that KRAB-ZFPs and their cofactor TRIM28 exert a marked influence on the transcription dynamics of embryonic stem cells via their docking of repressor complexes at TE-contained regulatory sequences. Until now, it was generally held that, beyond the early embryonic period, most TEs become permanently silenced, and that the evolutionary selection of KRAB-ZFPs and other TE controllers is the result of a simple evolutionary arms race between the host and these genetics invaders. I will present evolutionary, genomic and functional data that demonstrate otherwise, and indicate instead that transposons and their KRAB-ZFP controllers partner up to establish transcriptional networks that likely influence all aspects of human biology.