Mucosal tissues are in direct contact with the environment, and form the first barrier against external threats. Intestinal immunity constantly integrates microbial and dietary derived signals, and must dynamically adapt to ensure host fitness. Group 3 Innate Lymphoid Cells (ILC3) were recently acknowledged as immune cells that actively participate in the maintenance of this equilibrium, both through prompt secretion of soluble molecules and direct interactions with neighboring cells.

My thesis worked aimed at understanding the biology of an ILC3 subtype that harbor at their surface the NKp46 molecule (NKp46+ ILC3). Using advanced flow cytometry, cell culture and animal models, my coworker and I demonstrated that the presence of NKp46 at the surface of ILC3 required constant stimulation by environmental signals. Either in the absence of Notch-signaling or in the presence of TGF-β, NKp46 disappeared from the surface of these cells. NKp46 loss was associated with increased function, as they secreted more Interleukin-22, a molecule involved in the defense against extracellular microbe, but loss the ability to produce Interferon γ , a molecule typically produced in response to intracellular threat (viruses, bacteria and tumors).

My data support a dynamic view of immune function, as NKp46+ ILC3 adapted their function in response to environmental signals.The molecular actors identified could be used to regulating the balance between Interleukin-22 and Interferon γ production by ILC3, and serve as basis or included in existing therapies with a wide range of application like cancer and anti-microbial responses.

Rudolf Virchow postulated more than 150 years ago that inflammation might be linked to cancer development. Although a large body of experimental evidence accumulated to date strongly supports such a link, it is less […] 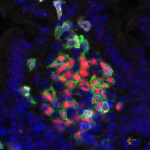 Mucosal homeostasis requires a delicate equilibrium between immune mechanisms and commensal microorganisms that impacts on the development and maintenance of critical physiological processes including digestion, metabolism or host defense. Several infectious or inflammatory disorders […]