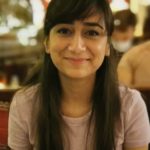 Parul graduated with a Master’s in Biomedical Science from the University of Glasgow. During her master’s, she worked in the laboratory of Dr. Richard McCulloch, and her projects focussed on the parasite Leishmania. She completed two short independent projects as part of her degree. The first project in Leishmania major focussed on testing the function of the SKP1 gene known to play a role in replication termination of DNA. The second project investigated the cell cycle stages in various developmental stages of Leishmania mexicana using Single Cell RNA Sequencing.

She joined Institut Pasteur on 1st October 2021 in the group of Dr. Brice Rotureau. Her project investigates the development of dermal trypanosomes, the causative agent of Human African Trypanosomiasis (HAT). The key objectives of the project are to understand the proliferation of the parasite in the skin, identify parasite exchanges between the bloodstream and dermis, and explore the parasite’s differentiation into transmissible forms. The study will be done on a new skin organoid model currently in development in the lab. The project aims to shed new light on the skin as a potentially important reservoir for trypanosomes responsible for sleeping sickness (HAT).