e.g. searching for members in projects tagged cancer
Search for
Count
IN
OUT
Content 1
Content 2
Search
Go back
Scroll to top
Share
Douglas Norberto
Céline Posseme
© Institut Pasteur
Cells infected for 24 hrs with C. Trachomatis. The cell nuclei are labelled in blue, the bacteria appear yellow, within the inclusion lumen. A bacterial protein secreted out the inclusion into the host cytoplasm id labelled in red.
Member: Research Engineer

I obtained a BSc degree in Biotechnology in 2003 at the National University of Quilmes (UNQ, Argentina). Then I joined the group of Dr. Diego De Mendoza in the Molecular and Cell Biology Institute of Rosario (IBR-CONICET, Rosario, Argentina) where I did my PhD thesis. My research project was focused in the study of the transcriptional regulation of the Acyl Carrier Protein (ACP), a central protein of the lipid biosynthesis metabolism in Bacillus subtilis and its role during sporulation. As part of my PhD work, I used genetic and cell biology approaches to understand how this protein is regulated at the transcription level and its role during the sporulation of this Gram-positive bacterial model. I also characterized the interaction of this protein with a central transcriptional regulator of the lipid synthesis pathway in this organism using biophysic and biochemical methodologies.

Then, in 2010 I moved to the Structural Microbiology Unit at the Institut Pasteur as a post-doctoral fellow. I worked on multiple projects, including several Histidine Kinases of Mycobacterium tuberculosis and SUB1, an essential protease of Plasmodium using biophysic and structural biology methodologies to understand at the mechanistic level how these proteins carry out their function and how their activity are regulated.

Since 2016, I have a permanent position as Research Engineer in this lab. As Labmanager of this Unit, I am responsible for the general organization of the lab and also I’m currently studying different aspects of the cell division in Corynebacterium glutamicum, in particular developing and adapting different genetic tools and in-vivo Interactomics approaches for this organisms. 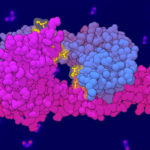 How cells grow and divide with extraordinary accuracy is at the center of all forms of life and has been a focus of research for many decades. Even though our understanding of the underlying […]