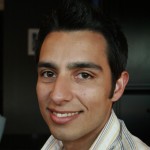 Marcio Marim graduated in Electrical Engineering in 2005 at the State University of Campinas, Brazil (UNICAMP). From 2006 to 2011 he was with the Quantitative Image Analysis Unit, Institut Pasteur, Paris, France, and received the M.Sc. degree in Applied Physics, Lasers, and Biological Environments in 2007 from the Pierre et Marie Curie University, Paris, France.

He received a Ph.D. degree in Image Processing at the Télécom ParisTech, Institut Télécom, Paris, France. His main research interests are sparsity, compressed sensing and denoising techniques for biological microscopy applications. Currently position: Co-founder of Yhello, a Web Agency based in Paris, France.