During his PhD in robotics (Amiens, Berck), FdC conceived an autonomous robot designed to help disabled people, and especially paraplegics. The robot used omnidirectional vision sensor to SLAM and navigated automatically in the environment in order to follow the wheelchair of disabled people. The aim of the project was to deport heavy devices such as synthetic arm on the robot, and to make it a handy companion.

Fabrice de Chaumont was initially hired at Pasteur to create a 3D engine based on OpenGL to represent bio sample and image analysis results in the internal software of the unit. Then he designed a new image analysis software, Icy, created to offer the last developments of image analysis units to the biologist community. Icy is open source, based on plugins and receive contribution from different labs over the world. He wrote the base of the kernel of Icy and the website. Then Stephane Dallongeville joined the effort and is now leading the project. Important contributions, such as graphical programming and a number of additional contribution have been developed by Alexandre Dufour. Icy was published in Nature Methods in 2012. (Icy: an open bioimage informatics platform for extended reproducible research, Fabrice de Chaumont, Stéphane Dallongeville, Nicolas Chenouard, Nicolas Hervé, Sorin Pop, Thomas Provoost, Vannary Meas-Yedid, Praveen Pankajakshan, Timothée Lecomte, Yoann Le Montagner, Thibault Lagache, Alexandre Dufour & Jean-Christophe Olivo-Marin)

He also initiated the Icy club, where people can come to solve original image analysis problem or get assistance on Icy (watch below). He is now contributing to Icy by developing advanced projects to the platform.

In 2012, Fabrice de Chaumont was working on tracking C. elegans in screening scenario. He created a new tracking based on deformable models driven by physics engine but it has been finally applied to another field: as he met Sylvie Granon who works on behavioural analysis of mice. They applied the tracking model to mice tracking which allows behavioural understanding of the animals: it provides details during the contact of animals that cannot be labelled automatically before. It also enables the observation of the events’ dynamic. This method allows to provide much more data per animal observed, therefore contributes to reduce the number of animals needed for experiments.

Fabrice de Chaumont is currently working on a complete new solution dedicated to the tracking of animals in collaboration with Elodie Ey, member of the team Human genetics and cognitive functions (Thomas Bourgeron) and the team Neurophysiologiy and behaviour (Philippe Faure, Nicolas Torquet).

Fabrice de Chaumont is a member of the Secretariat Général Scientifique (Nathalie de Parseval), and is dedicated to the website research of Pasteur

We have developed a method to perform the detection and the tracking of microscopic spots directly on four dimensional (3D+t) image data. It extends our previous work by being able to detect with high […]

We started a project for a new open-source image processing software platform dedicated to community work (de Chaumont et al, Nature Methods 2012). It includes a flexible framework designed around and with a native […] 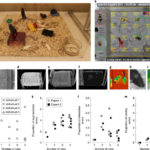 What is Live Mouse Tracker ? LMT is designed to track mice on the long term. It has been created with on idea on mind: to provide behaviourist a reliable system to annotate automatically […]