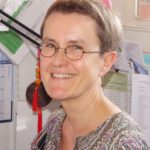 After having graduated in English literature from the Université de Bretagne Occidentale (Brest), I lived in London for five years where I worked as membership officer and personal assistant to the Secretary-General of the British Ports Association. I then moved to Amsterdam where I also lived for five years, working as technical officer for an association called RARE, Réseaux Associés pour la Recherche Européenne. I finally moved back to France in 1995, worked as a temp and freelance translator for a few years before joining the Institut Pasteur in May 2000 as a personal assistant for the management team. In 2008 I decided to move onto the research side of the Institut Pasteur and joined the labs of Artur SCHERF and Philippe BASTIN in the parasitology department. The way I see it, my role as research unit assistant is to help the lab members with all the administrative tasks and the paperwork which keep them away from the bench. About two-thirds of the staff in both labs are of foreign origin, which means that our working language is English, and most of them are non-permanent, which means that there is quite a large turnover – amongst many other tasks, I handle all recruitments. The SCHERF and BASTIN labs have CNRS and INSERM affiliations, so I constantly have to swing between Institut Pasteur, CNRS and INSERM procedures and online applications.