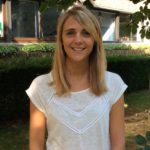 In 2007, Alix got in EBI (Ecole de Biologie Industrielle, Cergy Pontoise) an engineering school  specialized in Biotechnology. She graduated in 2012 in Research and Development. During her studies, she did different internships.

First, Alix did a three-month internship at the BID laboratory led by Professor P.Parker. A patent was in progress and she had to optimize a new bio-detector.

Then she did another internship at the University of Marseille in the laboratory of Professor Lombardo, during which she studied the interaction of the Tau protein with Tubulin, using different biophysical technics such as Isothermal Titration Calorimetry (ITC).

Finally, she did a 6-month internship at the Professor X.Nassif’s laboratory during which she studied the maf genes of N. meningitidis, comparing it to the contact-dependent growth inhibition (CDI) system, a known defense system available in other bacteria. She was trained to standard technics of molecular biology such as site directed mutagenesis and the development of genetic complementation assays to study those mutants.

In August 2013, she joined the Institut Pasteur.

She was first working on a research project, which consisted in  developing selective NEMO (NF-kB essential modulator) inhibitors that block the NF-kB signaling pathway. Different approaches were used to quantify and qualify the potency of those peptides such as gene reporter assay, fluorescence polarization, FACS and confocal microscopy. The results led to a very high potent NEMO inhibitor, and were recently deposited in an international patent in December 2016. In 2017, she presented for the first time her work at the 12th international Drug Discovery and Chemistry meeting held in San Diego (USA), and won the poster price at the Inflammation inhibitors session.

In March 2015, she was recruited to set up the Chemogenomic and Biological Screening platform (PF-CCB) of the Institut Pasteur in a close collaboration with Fabrice Agou . First of all, the challenge consisted in the development of microscopy-based high-content screening at high resolution to detect subcellular phenotypic changes in cell environment. She has now in charge in PF-CCB the “Stellarvision” microscope from optical biosytems (Santa Clara, USA), a high content screening microscope (full description available on the website), the ECHO 550 instrument,  a liquid handing system that dispenses drops in the Nano liter range with acoustic energy Transfer, as well as the Tecan infinite F500 plate reader which is very sensitive especially for polarization fluorescence and HTRF screening assays. Alix is now routinely developing phenotypic screening campaign using siRNA, 100% FDA approved chemical libraries and other chemical collections available within the platform.

In 2016, Alix also attended a workshop on “High Content Assay for Target Discovery using RNAi Technology”, at Institut Pasteur of Korea, to consolidate her expertise on siRNA screen.

For any futher questions, please don’t hesitate to contact her.