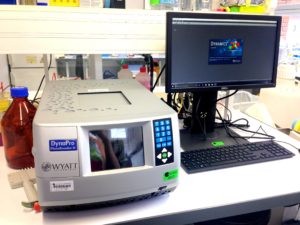 For small molecules, the DynaPro Plate Reader II can easily detect compound aggregates and aggregation inducers which often result from High-Throughput Screening (HTS) campaign. These primary Hits are often considered as false-positives with poor solubility and selectivity and it is advantageous to eliminate them at the earliest step of drug discovery programs.

For biotherapeutic development, the DynaPro Plate Reader II is a comprehensive solution for stability evaluation of macromolecules (proteins, antibodies, RNA), colloids and nanoparticles by measuring dynamic light scattering. When combined with a multi-angle light scattering (MALS) detector such as our DAWN HELEOS II for static light scattering (SLS) measurements, the DynaPro Plate Reader II measures aggregation, aggregate size distributions, changes in solution molecular weight, and propensity for aggregation. This can be determined via indicators of both thermal stability (Tonset, Tm, Tagg) and colloidal stability (A2/B22, kD), which may be quantified with plate-based DLS. Even viscosity of concentrated protein solutions can be screened across dozens of formulations in a single plate. Equipped with an onboard camera the DynaPro Plate Reader II can also capture an image of each well allowing you to verify if there is sample sedimentation, crystallites, salt crystal formation, contaminate on well bottom, sample turbidity or a bubble.

The DynaPro Plate Reader II also recently became a useful tool to study the solubility limit of molecules as well as to investigate phase-separated liquid compartments, also called liquid-liquid phase separation (LLPS). This physicochemical process observed in vitro reconstituted system and in cells has emerged as a key mechanism underlying the formation of molecularly distinct cellular bodies involved in a wide range of cellular activities. These biomolecular condensates mainly consist of the assembly of a complex mixture of protein-protein or RNA-protein interactions (under native or denaturated states) and the DynaPro Plate Reader II can provide an important tool for characterization of the molecular and physical features of these membraneless organelles.