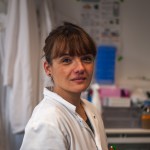 Mycobacterium abscessus is a pathogenic, rapidly growing mycobacterium responsible for pulmonary and cutaneous infections in immunocompetent patients and in patients with Mendelian disorders, such as cystic fibrosis (CF). Mycobacterium abscessus is known to transition from a smooth (S) morphotype with cell surface-associated glycopeptidolipids (GPL) to a rough (R) morphotype lacking GPL. Herein, we show that M. abscessus S and R variants are able to grow inside macrophages and are present in morphologically distinct phagosomes. The S forms are found mostly as single bacteria within phagosomes characterized by a tightly apposed phagosomal membrane and the presence of an electron translucent zone (ETZ) surrounding the bacilli. By contrast, infection with the R form leads to phagosomes often containing more than two bacilli, surrounded by a loose phagosomal membrane and lacking the ETZ. In contrast to the R variant, the S variant is capable of restricting intraphagosomal acidification and induces less apoptosis and autophagy. Importantly, the membrane of phagosomes enclosing the S forms showed signs of alteration, such as breaks or partial degradation. Although not frequently encountered, these events suggest that the S form is capable of provoking phagosome-cytosol communication. In conclusion, M. abscessus S exhibits traits inside macrophages that are reminiscent of slow-growing mycobacterial species.