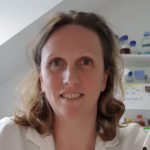 Bacterial chromosomes harbour a unique origin of bidirectional replication, oriC. They are almost always circular, with replication terminating in a region diametrically opposite to oriC, the terminus. The oriC-terminus organisation is reflected by the orientation of the genes and by the disposition of DNA-binding protein motifs implicated in the coordination of chromosome replication and segregation with cell division. Correspondingly, the E. coli and B. subtilis model bacteria possess a replication fork trap system, Tus/ter and RTP/ter, respectively, which enforces replication termination in the terminus region. Here, we show that tus and rtp are restricted to four clades of bacteria, suggesting that tus was recently domesticated from a plasmid gene. We further demonstrate that there is no replication fork system in Vibrio cholerae, a bacterium closely related to E. coli. Marker frequency analysis showed that replication forks originating from ectopic origins were not blocked in the terminus region of either of the two V. cholerae chromosomes, but progressed normally until they encountered an opposite fork. As expected, termination synchrony of the two chromosomes is disrupted by these ectopic origins. Finally, we show that premature completion of the primary chromosome replication did not modify the choreography of segregation of its terminus region.