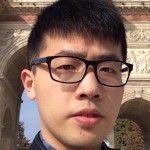 During cytokinesis, the intercellular bridge (ICB) connecting the daughter cells experiences pulling forces, which delay abscission by preventing the assembly of the ESCRT scission machinery. Abscission is thus triggered by tension release, but how ICB tension is controlled is unknown. Here, we report that caveolae, which are known to regulate membrane tension upon mechanical stress in interphase cells, are located at the midbody, at the abscission site, and at the ICB/cell interface in dividing cells. Functionally, the loss of caveolae delays ESCRT-III recruitment during cytokinesis and impairs abscission. This is the consequence of a twofold increase of ICB tension measured by laser ablation, associated with a local increase in myosin II activity at the ICB/cell interface. We thus propose that caveolae buffer membrane tension and limit contractibility at the ICB to promote ESCRT-III assembly and cytokinetic abscission. Together, this work reveals an unexpected connection between caveolae and the ESCRT machinery and the first role of caveolae in cell division.