In many Gram-negative bacteria, including Salmonella enterica serovar Typhimurium (S. Typhimurium), the sigma factor RpoS/σ(S) accumulates during stationary phase of growth, and associates with the core RNA polymerase enzyme (E) to promote transcription initiation of genes involved in general stress resistance and starvation survival. Whereas σ factors are usually inactivated upon interaction with anti-σ proteins, σ(S) binding to the Crl protein increases σ(S) activity by favouring its association to E. Taking advantage of evolution of the σ(S) sequence in bacterial species that do not contain a crl gene, like Pseudomonas aeruginosa, we identified and assigned a critical arginine residue in σ(S) to the S. Typhimurium σ(S)-Crl binding interface. We solved the solution structure of S. Typhimurium Crl by NMR and used it for NMR binding assays with σ(S) and to generate in silico models of the σ(S)-Crl complex constrained by mutational analysis. The σ(S)-Crl models suggest that the identified arginine in σ(S) interacts with an aspartate of Crl that is required for σ(S) binding and is located inside a cavity enclosed by flexible loops, which also contribute to the interface. This study provides the basis for further structural investigation of the σ(S)-Crl complex. 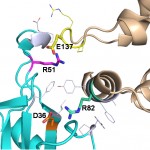 Regulation of many key biological processes in bacteria involves the interplay between Sigma factors and anti-Sigma factors that typically attenuate Sigma factor function by restricting its access to RNA polymerase (RNAP). In contrast, our […]