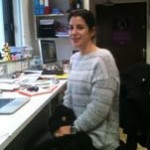 Cytokines are soluble molecules that regulate a large array of developmental processes. In the hematopoietic system, cytokines mediate the production of mature blood cells from specific lineages, by directly acting on hematopoietic progenitors. Cytokines also regulate the terminal differentiation of lymphocytes into particular effector populations, during the immune response. IL-10, produced in all immune responses, stands out as a major inhibitor of inflammation. While the role of pro-inflammatory cytokines in hematopoiesis is recognized, little is known of the role that cytokines that inhibit inflammatory reactions in the homeostasis of the hematopoietic system. To address this question, we generated a genetically modified mouse line – pMT-10 in our laboratory to express IL-10 under the control of the zinc-inducible metallothionein promoter. We have preliminary data that shows increased myeloid cell production and severe splenomegaly, resulting, upon prolonged IL-10 induction in medullary aplasia and death. These alterations mimic those found in primary myelofibrosis (PMF) a human myelo-proliferative disorder of high mortality. We propose that pMT-10 will allow testing alternative therapeutic approaches as the first animal model for PMF.

This study will provide evidence of whether IL-10 titers can be used as a biomarker to identify patients at risk of developing primary myelofibrosis and the rational for testing IL-10 inhibitors in patients with this disease.