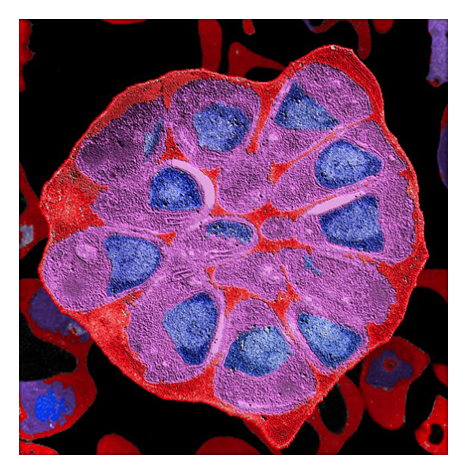 Fig. 2: Transmission electron micrograph of an iRBC (schizont). Nucleus shown in blue. Only few factors that interact with the DNA of P. falciparum have been identified and the recruitment of specific factors such as the plasmodial Sir2 and Set domain proteins to specific genes or chromosome compartments remains unknown. Gene relocation (active var gene) and spatial chromosome organization are key regulatory factors in gene expression, with however, few mechanistic insight yet. Role of Sir2 in ribosomal RNA Mancio Silva L., Lopez-Rubio JJ., Claes A. The histone deacetylase PfSir2a is a crucial regulator of facultative heterochromatin and contributes to virulence gene family default silencing. We have observed that this NAD-dependent enzyme has additional important nuclear functions linked to the parasite virulence. Apart from telomeres, PfSir2a also accumulates in the nucleolus, which harbours the developmentally regulated ribosomal RNA genes. We demonstrated that PfSir2a fine-tunes ribosomal RNA gene transcription. The synthesis of eukaryotic ribosomal RNA (rRNA) determines ribosome production and the potential for cell growth and proliferation. Using a parasite line in which PfSir2a has been disrupted, we observe that histones near the transcription start sites of all ribosomal RNA genes are hyperacetylated and that transcription of ribosomal RNA genes is upregulated. Furthermore, we observe that PfSir2a modulation of ribosomal RNA synthesis is linked to an altered number of daughter merozoites and the parasite multiplication rate. These findings provide for the first insights into an epigenetic mechanism that controls malaria parasite proliferation and virulence (Mancio Silva et al., 2013 Nature Communication). Role of Sir2 in genome stability and diversity in P. falciparum Lopez-Rubio JJ., Claes, A. Macpherson, C. We started analysing a potential role of plasmodial sirtuins in subtelomere DNA stability. In PfSir2 knock out parasites, we observed major chromosome rearrangements at subtelomeres using karyotype analysis. Complete DNA re-sequencing of both mutant strains revealed genetic recombination events that are higher than in 3D7 wild type, pointing to a role of PfSir2-dependent heterochromatin in maintaining the integrity of the subtelomeric regions by suppressing their recombination in P. falciparum. Long-term culture follow-up experiments of clones are ongoing to determine the rate and type of DNA rearrangements. This novel association of PfSir2 to genetic diversity does raise the possibility that metabolic changes on NAD+/NADH, or other environmental factors that could modulate PfSir2 activity, may increase genetic diversity in order to enhance genetic parasite variants able to survive better stress situations. PfAlbas constitute a new eukaryotic DNA/RNA-binding protein family Vembar, S. Claes, A., Scheidig, C. In P. falciparum, perinuclear subtelomeric chromatin (histone deacetylase and methylase) conveys monoallelic expression of virulence genes. However, proteins that directly bind to chromosome ends and recruit effector molecules are poorly described. We used the major subtelomeric DNA element called Telomere-Associated Repetitive Elements 6 (TARE6) to affinity purify novel chromatin components. We identified a novel DNA/RNA-binding protein family that bears homology to the archaeal protein Alba (Acetylation lowers binding affinity). We isolated three of the four PfAlba paralogs as part of a molecular complex that is associated with the P. falciparum-specific TARE6  subtelomeric region and showed in electromobility shift assays (EMSAs) that the PfAlbas bind to TARE6 repeats. In early blood stages, the PfAlba proteins were enriched at the nuclear periphery and partially co-localized with PfSir2. Using single-stranded RNA (ssRNA) probes in EMSAs, we found that PfAlbas bind to ssRNA, albeit with different binding preferences. We demonstrate for the first time in eukaryotes that Alba-like proteins bind to both DNA and RNA and that their intracellular location is developmentally regulated. Discovery of the PfAlbas may provide a link between the previously described subtelomeric non-coding RNA and the regulation of antigenic variation (Chene A., Vembar S., et al., 2012 Nucleic Acid Res.). We have now overexpressed different Alba members episomally and observe striking changes in transcript levels, suggesting a role in either transcript stability or directly by controlling gene transcription levels. An ApiAP2 member controls expression of clonally variant gene families in P. falciparum Martins, R., MacPherson C., Scheidig-Benatar C. During the intraerythrocytic cycle, P. falciparum expresses on the surface of its host red blood cell different clonally variant gene families such as the var, rif, stevor, Pfmc2TM and surf. The role of the non-var surface molecules in disease is less apparent yet. To further investigate transcriptional regulation of virulence genes, we focused on putative transcriptional regulators (ApiAP2 members), whose binding sites were predicted to be enriched in the 5′ UTR of var genes. Antibodies raised against one member of the ApiAP2 gene family called here AP2var14, showed perinuclear labelling, supporting a role in regulation of subtelomeric virulence genes. Transcriptional analysis of AP2var14 gene KO clones by RNA-Seq showed overexpression of genes (more than 4-fold) mainly derived from clonally variant gene families (rif, stevor, and Pfmc2TM). The interaction with promoter regions of these virulence genes with AP2var14 using ChIP analysis is ongoing.

Publié le: 08 Jul 2015 • Modifié le: 02 Nov 2015
We use cookies on our website to give you the most relevant experience by remembering your preferences and repeat visits. By clicking “Accept”, you consent to the use of ALL the cookies.
Cookie settingsACCEPT
Manage consent