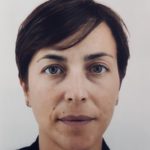 Grooming behaviour is the most common innate behaviour in animals. In rodents, it consists of sequences of movements organized in four phases, executed symmetrically on both sides of the animal and creating a syntactic chain of behavioural events. The grooming syntax can be altered by stress and novelty, as well as by several mutations and brain lesions. Grooming behaviour is known to be affected by alterations of the dopamine system, including dopamine receptor modulation, dopamine alteration in genetically modified animals, and after brain lesion. While a lot is known about the initiation and syntactic modifications of this refined sequence of movements, effects of unilateral lesion of dopamine neurons are unclear particularly regarding the symmetry of syntactic chains. In the present work we studied grooming in mice unilaterally lesioned in the medial forebrain bundle by 6-hydroxydopamine. We found a reduction in completion of grooming bouts, associated with reduction in number of transitions between grooming phases. The data also revealed the development of asymmetry in grooming behaviour, with reduced tendency to groom the contralateral side to the lesion. Symmetry was recovered following treatment with L-DOPA. Thus, the present work shows that unilateral lesion of dopamine neurons reduces self-grooming behaviour by affecting duration and numbers of events. It produces premature discontinuation of grooming chains but the sequence syntax remains correct. This deficient grooming could be considered as an intrinsic symptom of Parkinson’s disease in animal models and could present some similarities with abnormalities of motor movement sequencing seen in patients. Our study also suggests grooming analysis as an additional method to screen parkinsonism in animal models.