The Envelope Proteins of the Bunyavirales. 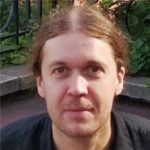 The Bunyavirales Order encompasses nine families of enveloped viruses containing a single-stranded negative-sense RNA genome divided into three segments. The small (S) and large (L) segments encode proteins participating in genome replication in the infected cell cytoplasm. The middle (M) segment encodes the viral glycoproteins Gn and Gc, which are derived from a precursor polyprotein by host cell proteases. Entry studies are available only for a few viruses in the Order, and in each case they were shown to enter cells via receptor-mediated endocytosis. The acidic endosomal pH triggers the fusion of the viral envelope with the membrane of an endosome. Structural studies on two members of this Order, the phleboviruses and the hantaviruses, have shown that the membrane fusion protein Gc displays a class II fusion protein fold and is homologous to its counterparts in flaviviruses and alphaviruses, which are positive-sense, single-stranded RNA viruses. We analyze here recent data on the structure and function of the structure of the phlebovirus Gc and hantavirus Gn and Gc glycoproteins, and extrapolate common features identified in the amino acid sequences to understand also the structure and function of their counterparts in other families of the Bunyavirales Order. Our analysis also identified clear structural homology between the hantavirus Gn and alphavirus E2 glycoproteins, which make a heterodimer with the corresponding fusion proteins Gc and E1, respectively, revealing that not only the fusion protein has been conserved across viral families.