e.g. searching for members in projects tagged cancer
Search for
Count
IN
OUT
Content 1
Content 2
Search
Go back
Scroll to top
Share
The diversity of molecular mechanisms of carbonate biomineralization by bacteria
Endocannabinoids Attenuate the Virulence of Certain Enteropathogenic Bacteria.
© Thomas Wollert
Publication : Frontiers in cell and developmental biology 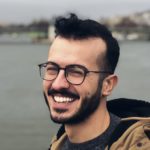 Glioblastomas (GBMs) are the most common primary brain tumors characterized by strong invasiveness and angiogenesis. GBM cells and microenvironment secrete angiogenic factors and also express chemoattractant G protein-coupled receptors (GPCRs) to their advantage. We investigated the role of the vasoactive peptide urotensin II (UII) and its receptor UT on GBM angiogenesis and tested potential ligand/therapeutic options based on this system. On glioma patient samples, the expression of UII and UT increased with the grade with marked expression in the vascular and peri-necrotic mesenchymal hypoxic areas being correlated with vascular density. In vitro human UII stimulated human endothelial HUV-EC-C and hCMEC/D3 cell motility and tubulogenesis. In mouse-transplanted Matrigel sponges, mouse (mUII) and human UII markedly stimulated invasion by macrophages, endothelial, and smooth muscle cells. In U87 GBM xenografts expressing UII and UT in the glial and vascular compartments, UII accelerated tumor development, favored hypoxia and necrosis associated with increased proliferation (Ki67), and induced metalloproteinase (MMP)-2 and -9 expression in Nude mice. UII also promoted a “tortuous” vascular collagen-IV expressing network and integrin expression mainly in the vascular compartment. GBM angiogenesis and integrin αvβ3 were confirmed by in vivo 99mTc-RGD tracer imaging and tumoral capture in the non-necrotic area of U87 xenografts in Nude mice. Peptide analogs of UII and UT antagonist were also tested as potential tumor repressor. Urotensin II-related peptide URP inhibited angiogenesis in vitro and failed to attract vascular and inflammatory components in Matrigel in vivo. Interestingly, the UT antagonist/biased ligand urantide and the non-peptide UT antagonist palosuran prevented UII-induced tubulogenesis in vitro and significantly delayed tumor growth in vivo. Urantide drastically prevented endogenous and UII-induced GBM angiogenesis, MMP, and integrin activations, associated with GBM tumoral growth. These findings show that UII induces GBM aggressiveness with necrosis and angiogenesis through integrin activation, a mesenchymal behavior that can be targeted by UT biased ligands/antagonists.

https://pubmed.ncbi.nlm.nih.gov/33937253
Published on: 01 Jan 2021
We use cookies on our website to give you the most relevant experience by remembering your preferences and repeat visits. By clicking “Accept”, you consent to the use of ALL the cookies.
Cookie settingsACCEPT
Manage consent