Structure of the oncoprotein Rcl bound to three nucleotide analogues

Rcl is a novel N-glycoside hydrolase found in mammals that shows specificity for the hydrolysis of 5′-monophosphate nucleotides. Its role in nucleotide catabolism and the resulting production of 2-deoxyribose 5-phosphate has suggested that it might fuel cancer growth. Its expression is regulated by c-Myc, but its role as an oncoprotein remains to be clarified. In parallel, various nucleosides have been shown to acquire pro-apoptotic properties upon 5′-monophosphorylation in cells. These include triciribine, a tricyclic nucleoside analogue that is currently in clinical trials in combination with a farnesyltransferase inhibitor. Similarly, an N(6)-alkyl-AMP has been shown to be cytotoxic. Interestingly, Rcl has been shown to be inhibited by such compounds in vitro. In order to gain better insight into the precise ligand-recognition determinants, the crystallization of Rcl with these nucleotide analogues was attempted. The first crystal structure of Rcl was solved by molecular replacement using its NMR structure in combination with distantly related crystal structures. The structures of Rcl bound to two other nucleotides were then solved by molecular replacement using the previous crystal structure as a template. The resulting structures, solved at high resolution, led to a clear characterization of the protein-ligand interactions that will guide further rational drug design. 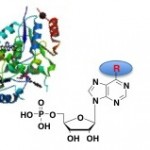 Nucleoside analogues as potential antitumor agents. This project aims to characterize and validate the nucleotide N-hydrolase DNPH1 as a new target in oncology. Inhibition of Rcl alone or in combination with other chemotherapeutic drugs […]