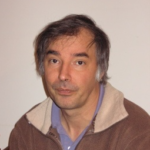 The hereditary neurodegenerative disorder spinal muscular atrophy (SMA) is characterized by the loss of spinal cord motor neurons and skeletal muscle atrophy. SMA is caused by mutations of the survival motor neuron (SMN) gene leading to a decrease in SMN protein levels. The SMN deficiency alters nuclear body formation and whether it can contribute to the disease remains unclear. Here we screen a series of small-molecules on SMA patient fibroblasts and identify flunarizine that accumulates SMN into Cajal bodies, the nuclear bodies important for the spliceosomal small nuclear RNA (snRNA)-ribonucleoprotein biogenesis. Using histochemistry, real-time RT-PCR and behavioural analyses in a mouse model of SMA, we show that along with the accumulation of SMN into Cajal bodies of spinal cord motor neurons, flunarizine treatment modulates the relative abundance of specific spliceosomal snRNAs in a tissue-dependent manner and can improve the synaptic connections and survival of spinal cord motor neurons. The treatment also protects skeletal muscles from cell death and atrophy, raises the neuromuscular junction maturation and prolongs life span by as much as 40 percent (p < 0.001). Our findings provide a functional link between flunarizine and SMA pathology, highlighting the potential benefits of flunarizine in a novel therapeutic perspective against neurodegenerative diseases.

https://www.ncbi.nlm.nih.gov/pubmed/29391529
Published on: 01 Feb 2018 • Modified on: 08 Oct 2018
We use cookies on our website to give you the most relevant experience by remembering your preferences and repeat visits. By clicking “Accept”, you consent to the use of ALL the cookies.
Cookie settingsACCEPT
Manage consent