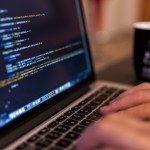 In this report, we describe the involvement of the quail neuroretina 1 (QN1) protein in retinal development. The Qn1 cDNA was isolated as a gene specifically expressed at the onset of neuronal cell cycle withdrawal (Bidou et al., Mech. Dev. 43 (1993) 159). Qn1 is located in the cytoplasm in proliferating cells during the early stages of the development. Its distribution changes, becoming predominantly nuclear, in neurons during establishment of the quiescent state upon the differentiation. We decreased the amount of QN1 protein by an antisense strategy in vitro or in vivo. This decrease of the amount of QN1 protein results in additional mitosis and in severe abnormalities such as retinal dysplasia. Our results suggest that QN1 plays a key role at the onset of neuronal cell cycle withdrawal.