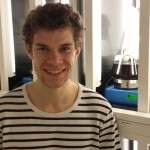 We present results of the first large-scale interlaboratory study carried out in synthetic biology, as part of the 2014 and 2015 International Genetically Engineered Machine (iGEM) competitions. Participants at 88 institutions around the world measured fluorescence from three engineered constitutive constructs in E. coli. Few participants were able to measure absolute fluorescence, so data was analyzed in terms of ratios. Precision was strongly related to fluorescent strength, ranging from 1.54-fold standard deviation for the ratio between strong promoters to 5.75-fold for the ratio between the strongest and weakest promoter, and while host strain did not affect expression ratios, choice of instrument did. This result shows that high quantitative precision and reproducibility of results is possible, while at the same time indicating areas needing improved laboratory practices.