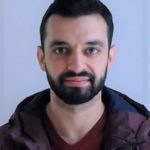 In malaria, CD4 Th1 and T follicular helper (TFH) cells are important for controlling parasite growth, but Th1 cells also contribute to immunopathology. Moreover, various regulatory CD4 T-cell subsets are critical to hamper pathology. Yet the antigen-presenting cells controlling Th functionality, as well as the antigens recognized by CD4 T cells, are largely unknown. Here, we characterize the MHC II immunopeptidome presented by DC during blood-stage malaria in mice. We establish the immunodominance hierarchy of 14 MHC II ligands derived from conserved parasite proteins. Immunodominance is shaped differently whether blood stage is preceded or not by liver stage, but the same ETRAMP-specific dominant response develops in both contexts. In naïve mice and at the onset of cerebral malaria, CD8α+ dendritic cells (cDC1) are superior to other DC subsets for MHC II presentation of the ETRAMP epitope. Using in vivo depletion of cDC1, we show that cDC1 promote parasite-specific Th1 cells and inhibit the development of IL-10+ CD4 T cells. This work profiles the P. berghei blood-stage MHC II immunopeptidome, highlights the potency of cDC1 to present malaria antigens on MHC II, and reveals a major role for cDC1 in regulating malaria-specific CD4 T-cell responses.