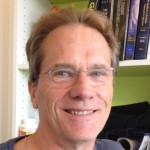 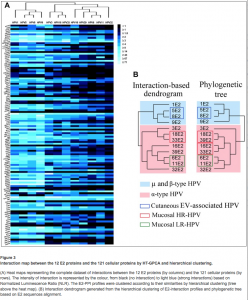 Human Papillomaviruses (HPV) cause widespread infections in humans, resulting in latent infections or diseases ranging from benign hyperplasia to cancers. HPV-induced pathologies result from complex interplays between viral proteins and the host proteome. Given the major public health concern due to HPV-associated cancers, most studies have focused on the early proteins expressed by HPV genotypes with high oncogenic potential (designated high-risk HPV or HR-HPV). To advance the global understanding of HPV pathogenesis, we mapped the virus/host interaction networks of the E2 regulatory protein from 12 genotypes representative of the range of HPV pathogenicity. Large-scale identification of E2-interaction partners was performed by yeast two-hybrid screenings of a HaCaT cDNA library. Based on a high-confidence scoring scheme, a subset of these partners was then validated for pair-wise interaction in mammalian cells with the whole range of the 12 E2 proteins, allowing a comparative interaction analysis. Hierarchical clustering of E2-host interaction profiles mostly recapitulated HPV phylogeny and provides clues to the involvement of E2 in HPV infection. A set of cellular proteins could thus be identified discriminating, among the mucosal HPV, E2 proteins of HR-HPV 16 or 18 from the non-oncogenic genital HPV. The study of the interaction networks revealed a preferential hijacking of highly connected cellular proteins and the targeting of several functional families. These include transcription regulation, regulation of apoptosis, RNA processing, ubiquitination and intracellular trafficking. The present work provides an overview of E2 biological functions across multiple HPV genotypes.