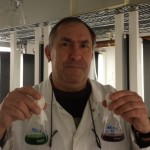 The PCC comprises more than 750 axenic strains isolated from very diverse habitats. The sequencing of the 16S rRNA of the majority of the PCC strains permitted to select reference strains for several genomic […]