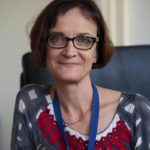 Human enteroviruses (HEVs) are endemic worldwide and among the most common viruses infecting humans. Nevertheless, there are very limited data on the circulation and genetic diversity of HEVs in developing countries and sub-Saharan Africa in particular. We investigated the circulation and genetic diversity of HEVs among 436 healthy children in a limited area of the far north region of Cameroon in 2008 and 2009. We also characterized the genetic biodiversity of 146 nonpolio enterovirus (NPEV) isolates obtained throughout the year 2008 from stool specimens of patients with acute flaccid paralysis (AFP) in Cameroon, Chad, and Gabon. We found a high rate of NPEV infections (36.9%) among healthy children in the far north region of Cameroon. Overall, 45 different HEV types were found among healthy children and AFP patients. Interestingly, this study uncovered a high rate of HEVs of species C (HEV-C) among all typed NPEVs: 63.1% (94/149) and 39.5% (49/124) in healthy children and AFP cases, respectively. Besides extensive circulation, the most prevalent HEV-C type, coxsackievirus A-13, featured a tremendous intratypic diversity. Africa-specific HEV lineages were discovered, including HEV-C lineages and the recently reported EV-A71 “genogroup E.” Virtually all pathogenic circulating vaccine-derived polioviruses (cVDPVs) that have been fully characterized were recombinants between oral poliovaccine (OPV) strains and cocirculating HEV-C strains. The extensive circulation of diverse HEV-C types and lineages in countries where OPV is massively used constitutes a major viral factor that could promote the emergence of recombinant cVDPVs in the Central African subregion.