DNA polymerase μ is a global player in the repair of non-homologous end-joining substrates.

The specialized DNA polymerase μ (pol μ) intervenes in the repair mechanism non-homologous end-joining (NHEJ) as an end-processing factor but its role has not been fully elucidated. Pol μ has been shown to participate in DNA synthesis at junctions in vitro, including on unpaired substrates, and to promote annealing. However, the phenotypes observed in vivo poorly recapitulate the functions of pol μ reported in vitro. We analysed the repair of DNA double-strand breaks (DSBs) in a cellular context using improved NHEJ substrates. These substrates do not replicate in mammalian cells, thereby result in clonal repair events, which allows the measure of the efficiency of repair. We validated this paradigm by comparing the repair of NHEJ substrates to the repair reported for chromosome DSBs in mouse cells. Molecular analysis and, in most cases sequencing of more than 1500 repair events on a variety of NHEJ substrates in wild type and pol μ(-/-) mouse embryonic fibroblasts shows that, unexpectedly, the absence of pol μ decreases the efficiency of joining of all types of DSBs, including those that do not undergo end-processing. Importantly, by reducing the efficiency of accurate events, lack of pol μ also affects the overall fidelity of the repair process. We also show that, although pol μ does not help protect DNA ends from resection, the efficiency of repair of resected ends is reduced in the absence of pol μ. Interestingly, the DNA synthesis activity of pol μ, including on non-aligned substrates, appears negligible at least in a cellular context. Our data point to a critical role for pol μ as a global repair player that increases the efficiency and the fidelity of NHEJ. 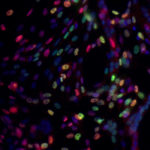