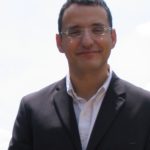 The roles of interleukin-17 (IL-17) and neutrophils in the lung have been described as those of two intricate but independent players. Here we identify neutrophils as the primary IL-17-secreting subset of cells in a model of inhalation anthrax using A/J and C57BL/6 mice. With IL-17 receptor A knockout (IL-17RA-/-) mice, we confirmed that IL-17A/F signaling is instrumental in the self-recruitment of this population. We also show that the IL-17A/F axis is critical for surviving pulmonary infection, as IL-17RA-/- mice become susceptible to intranasal infection by Bacillus anthracis Sterne spores. Strikingly, infection with a fully virulent strain did not affect IL-17RA-/- mouse survival. Eventually, by depleting neutrophils in wild-type and IL-17RA-/- mice, we demonstrated the crucial role of IL-17-secreting neutrophils in mouse survival of infection by fully virulent B. anthracis. This work demonstrates the important roles of both IL-17 signaling and neutrophils in clearing this pathogen and surviving pulmonary B. anthracis infection.