Brain-to-brain coupling during handholding is associated with pain reduction 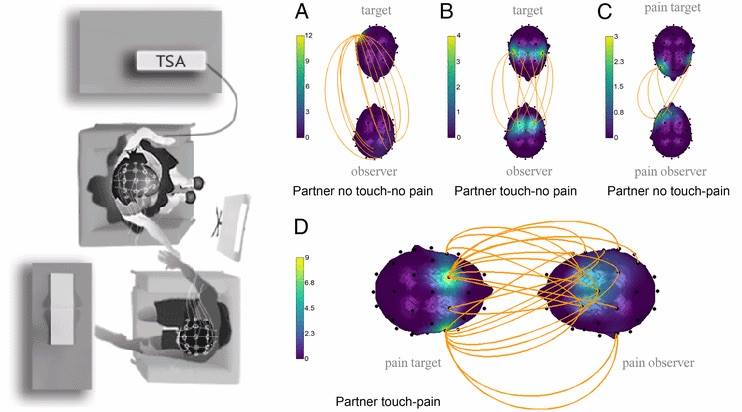 Significance
The mechanisms that underlie social touch analgesia are largely unknown. Here, we apply a hyperscanning approach with real-life interaction of dyads to examine the association between brain-to-brain coupling and pain relief. Our findings indicate that hand-holding during pain increases the brain-to-brain coupling network that correlates with the magnitude of the analgesia and the observer’s empathic accuracy. These findings make a unique contribution to our understanding of physiological mechanisms of touch-related analgesia.

Abstract
The mechanisms underlying analgesia related to social touch are not clear. While recent research highlights the role of the empathy of the observer to pain relief in the target, the contribution of social interaction to analgesia is unknown. The current study examines brain-to-brain coupling during pain with interpersonal touch and tests the involvement of interbrain synchrony in pain alleviation. Romantic partners were assigned the roles of target (pain receiver) and observer (pain observer) under pain–no-pain and touch–no-touch conditions concurrent with EEG recording. Brain-to-brain coupling in alpha–mu band (8–12 Hz) was estimated by a three-step multilevel analysis procedure based on running window circular correlation coefficient and post hoc power of the findings was calculated using simulations. Our findings indicate that hand-holding during pain administration increases brain-to-brain coupling in a network that mainly involves the central regions of the pain target and the right hemisphere of the pain observer. Moreover, brain-to-brain coupling in this network was found to correlate with analgesia magnitude and observer’s empathic accuracy. These findings indicate that brain-to-brain coupling may be involved in touch-related analgesia.