Bacteria release low-molecular-weight by-products called secondary metabolites, which contribute to bacterial ecology and biology. Whereas volatile compounds constitute a large class of potential infochemicals, their role in bacteria-bacteria interactions remains vastly unexplored. Here we report that exposure to gaseous ammonia released from stationary-phase bacterial cultures modifies the antibiotic resistance spectrum of all tested Gram-negative and Gram-positive bacteria. Using Escherichia coli K12 as a model organism, and increased resistance to tetracycline as the phenotypic read-out, we demonstrate that exposure to ammonia generated by the catabolism of l-aspartate increases the level of intracellular polyamines, in turn leading to modifications in membrane permeability to different antibiotics as well as increased resistance to oxidative stress. We show that the inability to import ammonia via the Amt gas channel or to synthesize polyamines prevent modification in the resistance profile of aerially exposed bacteria. We therefore provide here the first detailed molecular characterization of widespread, long-range chemical interference between physically separated bacteria. 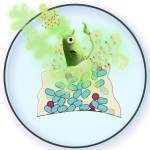