The move of vertebrates to a terrestrial lifestyle required major adaptations in their locomotory apparatus and reproductive organs. While the fin-to-limb transition has received considerable attention, little is known about the developmental and evolutionary origins of external genitalia. Similarities in gene expression have been interpreted as a potential evolutionary link between the limb and genitals; however, no underlying developmental mechanism has been identified. We re-examined this question using micro-computed tomography, lineage tracing in three amniote clades, and RNA-sequencing-based transcriptional profiling. Here we show that the developmental origin of external genitalia has shifted through evolution, and in some taxa limbs and genitals share a common primordium. In squamates, the genitalia develop directly from the budding hindlimbs, or the remnants thereof, whereas in mice the genital tubercle originates from the ventral and tail bud mesenchyme. The recruitment of different cell populations for genital outgrowth follows a change in the relative position of the cloaca, the genitalia organizing centre. Ectopic grafting of the cloaca demonstrates the conserved ability of different mesenchymal cells to respond to these genitalia-inducing signals. Our results support a limb-like developmental origin of external genitalia as the ancestral condition. Moreover, they suggest that a change in the relative position of the cloacal signalling centre during evolution has led to an altered developmental route for external genitalia in mammals, while preserving parts of the ancestral limb molecular circuitry owing to a common evolutionary origin. 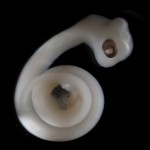